If you manage drivers in Microsoft Deployment Toolkit, you know it can get unwieldy to manage all the drivers in one big folder. I had done it that way for quite a while as I only had 3 or 4 builds of computers that I managed from MDT. These days though I manage about 10 different kinds of computers covering netbooks, laptops, desktops and servers.  I needed a way to be able to figure out which driver was for which computer. I had used folders to manage this and it seemed to work okay. Put all the Dell drivers in one folder, put HP into another folder. I never encountered any problems doing this.

I was reading a post about driver management recently by Johan Arwidmark and he takes it a step further. To ensure the Dell doesn’t get an HP driver, or vice versa, he uses driver groups. I took it one step further and added the make and model.

Here is the screen shot of my drivers folder. 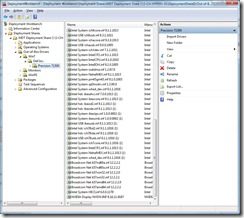 Next edit the task sequence and setup which folders to look at when deploying the operating system.

Finally, we need to tell MDT not to use all the drivers. So at the inject drivers task, we tell it to use Nothing. It will inject the drivers specified in the DriverGroup 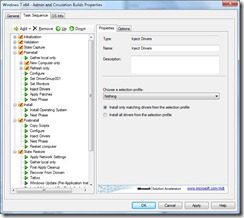