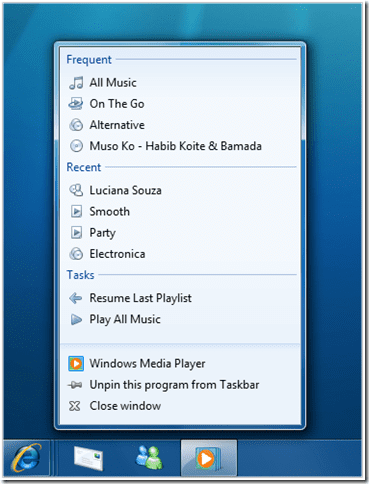 I installed Windows 7 Beta on Saturday to my laptop. It had just finished installing and was I just starting to check it out when Tracey noticed I was done. She then asked to borrow the laptop and she logged on to the machine so she could surf the web. I had wanted to try out some of the new features in Windows 7 Beta but I guess that would have to wait. Tracey had important business, (FaceBook or something like that), so I would have to watch Saturday Night Live while Tracey played on the laptop.

I should point out, Tracey was pretty much a novice on the computer when we first started dating. She just started using a computer on a regular basis back in September. She was using a desktop I had but then she discovered my laptop over the Christmas holidays and now I have had to give up my laptop pretty much whenever she wants. Which I don’t mind actually, eventually I’ll get her a laptop that she can call her own.

So Tracey got to play with the new Windows 7 build before me and one of the new features I helped her discover were the jump lists.

Jump lists are a menu option available by right clicking a program in the taskbar. In the picture, you’ll  notice how by right clicking on Media Player icon, you can get a quick list of things to do with Media Player. For example, you can then listen to music you just recently listened to, resume the last playlist played or play all the music. Microsoft Excel will show a list of recently opened files.

Tracey really liked Internet Explorer’s jump list which shows the pages you recently visited. For her, it allows her to open and launch Internet Explorer on a page she was recently at. Tracey, being a creature of habit, only has a small list of pages she checks out daily so she can do that to open up where she needs to be. For me, it means less time having to help her find the page she wants to look for.

While there are other changes between the PDC build and the Beta build, this is probably one of the best UI changes.