I am getting caught up on some blogging this evening.

While the Windows Phone 7 phones have launched already in Canada, I had a chance back in September to see the new phones and some of great Canadian developers who are writing software for the new device.I will say first impressions about the hardware, the phone that I got to play with had a nice large screen. It was larger than an iPhone, and probably around the same size as some of the android devices I have seen. The second thing great about it is the camera that is in it. The pictures being taken that evening from the phone looked great. I don’t know if Joey has any photos from the event posted or not, but if he does I’ll post a link from here to them. The touchscreen was responsive, but didn’t seem oversensitive like the Blackberry 9800 I have been testing at work lately. 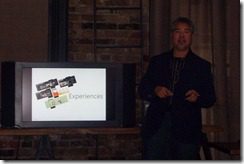 Here is Joey introducing the phone and getting events kicked off. 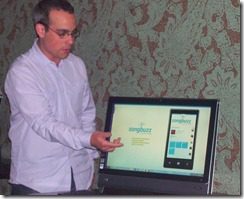 Here is one of the developers showing a demonstration of his program.

It was a great event. We got an early preview of the phone and were able to see some of the new applications being developed for the phone. One of my favourites was a Tim Horton’s locator application. Not being a programmer by trade, I did have the chance at TechDays Canada to sit in GoDevMental which is a program for students to learn about Windows Phone development or Web Development. I was actually able to follow along Joey’s session and see how the programming was done. I might even tackle writing a basic Windows Phone 7 application but don’t expect great things from me as programming is something I haven’t done in about 12 years.

The part I plan to play with a lot is the Media Center functionality. I record TV on my Win 7 box in the basement. We then use the Xbox to watch it on the flatscreen upstairs and the comfort of the couch. I spoke about this at code camp in Ottawa back in April. Anyhow, what I am hoping to do is transfer that video from the computer to phone and be able to watch it at my leisure when on the go.