I had the chance this past weekend to take Nathan to the Gruffalo’s child. It was at The Grand Theatre and put on by Tall Stories. The city also had a table setup to make crafts. In typical Nathan style, he made 2 puppets. The kid loves doing arts and crafts. 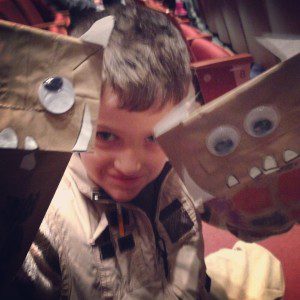 We waited for the show to start and one of the things that impressed me most was about five minutes before the show started the mouse, who is one of the main character’s in the show, comes out and starts working the crowd asking for cheese. The reason this impressed me is as one who has done a fair number of IT presentations over the years, meeting the crowd beforehand gives a good feel to gauge your audience. 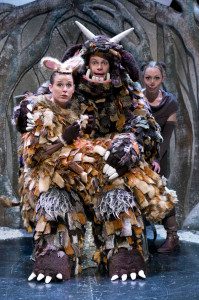 The show started shortly after and I will say it was very well done. The person playing the Gruffalo also plays the part of the Snake, Owl and Fox and he did a great job mixing it up. All the actors were very good and I caught the lady playing the mouse smiling from ear to ear as she rested along side the stage waiting for her next part in the play. You could tell she was enjoying performing the show. There was a joke or two that maybe only the adults would have picked up but this show did a great job of entertaining all ages. I see they are moving on to the United States now but if you do get the chance go see a show, do it as I don’t think you’ll be disappointed. 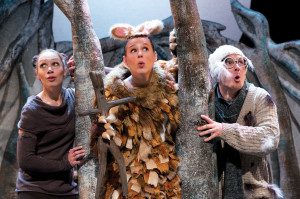 Pictures of the Gruffalo’s Child play are courtesy of Tall Stories.